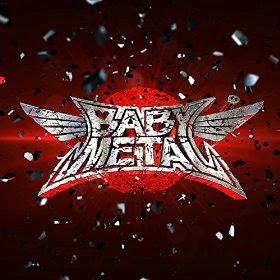 BabyMetal is quite the oddity. It's a mix of Japanese pop and metal. Don't know what Japanese pop sounds like? Well, go to your nearest arcade or Chuck-E-Cheese. Go to the Dance Dance Revolution game. Whatever music you hear pouring out of that cabinet is J-pop. Now put metal with it. You'd think that would be awful but, against all odds, it works. The songs themselves are catchy as heck - and heavy. The people responsible for the music know metal. They know how to write a riff and you can tell that they have been longtime fans of metal just by how quality the music is. The girls singing are well... totes adorbs. Also, the lead singer is fantastic - she's got the chops to handle both the pop aspects and the metal crunch. She's only sixteen (the other girls are twelve, I think), so it will be interesting to see where her career goes from here. This album also qualifies as "instant good mood" music.

Useless Fact: The girls didn't know anything about metal when they were told about the band.
Posted by The Old Man at 10:46 AM