Trans-Siberian Orchestra - "Dreams of Fireflies (On a Christmas Night)" 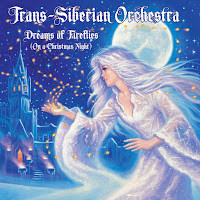 Trans-Siberian Orchestra - Dreams of Fireflies (On a Christmas Night)
2012, Lava

1. Winter Palace
2. Dreams of Fireflies (On a Christmas Night)
3. I Had a Memory
4. Someday
5. Time You Should Be Sleeping

Dreams of Fireflies serves as sort of a postlude to the TSO Christmas trilogy. There's no surprises here - if you like TSO, you'll like this little EP. Though there isn't much to be had. There's only five songs and no song is over four minutes long. This isn't necessarily a bad thing but depending on how much you pay for it, you might not feel like you're getting your money's worth. However, the music is awesome as usual. The first two tracks are nice heavy, progressive instrumentals. "Someday" and "Time You Should Be Sleeping" are both good ballads. I say if you liked the trilogy, you probably won't regret picking this up. Love that cover art!

Useless Fact: As far as I know there's no actual story for this album.
Posted by The Old Man at 12:17 PM