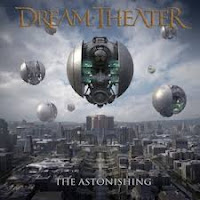 Oh gosh... yeah... um... no thanks, guys. When I first heard about The Astonishing I was looking forward to it. It sounded like it could be good. Well... I honestly don't know. I just know it's not for me. It's a two-and-a-half hour theatrical music extravaganza. The problem is that there's nothing in the way of hooks or memorable melodies. There's not even any interesting progressive stuff to hold your attention. It's just this big, bloated, self-indulgent musical that takes up way too much of my time and doesn't give me anything for it. Granted, the music is executed with the precision and talent that you come to expect from Dream Theater, but as I said, most of it isn't very interesting and is only there to prop up the story.

It's supposed to be some epic battle between good and evil, I guess. What it really is, however, is every trope you've ever seen from Super Nintendo-era Final Fantasies. There's the evil king and his special daughter. Naturally, she's the love interest for the hero - the "chosen one" who can save the world through the power of friendship music. And they've wasted so much money and resources on this nonsense. Are these guys, like, thirteen? The name of the evil emperor is Nafaryus. Flippin' Nafaryus. Really?! Oh, and there's Faythe. Good grief guys.

Ugh. Some people might like this but I would much rather just have a good album. Please don't do this again. I'll give you guys one more album to impress me again but then I'm tapping out.

Useless Fact: I guess there's a website where you can explore the characters and the world the album takes place in. For people who've never played Final Fantasy, I guess.