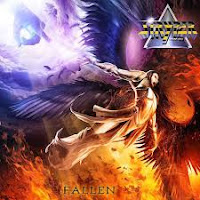 I've never been a huge Stryper fan. I like them alright. I really like the older stuff, but their newer stuff has never really done much for me. Even when they made a move back toward their classic sound, I remained uninterested. However, I did notice that Fallen had made a lot of "best of" lists for 2015 so I decided to check it out. I'm glad I did! Fallen is not merely "one of their better albums from the latter period" but one of their best albums period. I would go as far as to say this is probably the finest album of their career. This is also probably the heaviest I've ever heard them. Michael Sweet is at the top of his vocal game here - even hitting the high notes of days gone by. The songs are infectious, with great hooks and riffs. Twin leads abound! Even the ballad ("All Over Again") is probably the best ballad they've ever done. They've even thrown in a cover of "After Forever." Now, it won't ever replace the Deliverance version as my favorite, but it's still really good and fits well on the album. If you're trying to get someone into Stryper, this is definitely the album to show them.

Useless Fact: Didn't Stryper do a covers album? And an album of rerecordings? I think they did. I wonder if they're any good?
Posted by The Old Man at 9:12 AM