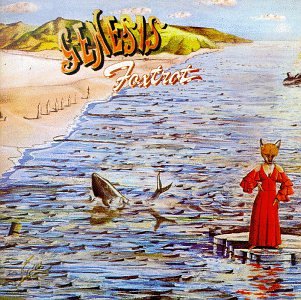 1. Watcher of the Skies
2. Time Table
3. Get 'Em Out By Friday
4. Can-Utility and the Coastliners
5. Horizons
6. Supper's Ready


If there is a progressive rock hall of fame, I’m sure Foxtrot occupies a place in it. This album is a masterwork. A true piece of art. As I listened to it I realized just how much Genesis has influenced modern prog bands. Some of my favorites, like Spock’s Beard, Haken, Dream Theater, Ayreon, etc. all take at least some of their cues from seventies era Genesis. Indeed, that era, Foxtrot in particular, codifies some of the prog rock tropes you’ll see in said modern bands.

Again, this album is basically “Progressive Rock The talent and technical mastery is undeniable. Phil Collins again impresses with such expressive drumming. He is quickly becoming one of my favorite drummers. Of course we’ve also got Mike Rutherford’s melodic bass which does far more than simply lay down a rhythm section. It’s all over the place and pretty far forward in the mix, making it a vital component of these tracks. Steve Hackett provides the achingly beautiful acoustic guitar based “Horizons.”  Then we have Peter Gabriel. I’ve always liked his vocals and his solo material, so it’s always good to hear him again.

Okay… now that I’ve lauded enough praise on this album I can admit something that will probably be heresy to old-school Genesis fans. I… kind of like Duke a little better.

Hang on a second, put down the stone. I like the album. A lot, actually.

However, this was definitely the band’s intellectual period. They put a lot of high-minded concepts into these songs. Sometimes it’s relatable, such as “Time Tables” where they muse about human nature. Other times…not so much. Duke, lyrically speaking, was a very down to earth album and a very human one, singing of love and loss. Foxtrot, however, is definitely written by a band who lets their singer dress up as a sunflower for art.

Take for instance “Get ‘Em Out By Friday.” It’s a pretty cool, more upbeat jam (one of my favorites) about innocent people being forced out of their homes. Then by the end of the track there’s something about genetic manipulation? Or something? I’m not quite sure. But that’s what I’m talking about. It’s a little bit harder to emotionally invest in songs when the lyrics seem to be written by a spacemen. We also have “Can-Utility And The Coastliners.” I am not sure what this song is about at all. There’s just this emotional disconnect I had with this album. I liked it, for sure, but I wasn’t really emotionally invested in it.

“But a lot of bands to that sort of thing!” True. But when Ayreon sings about space whales, the emotion behind the songs is still very much human. And when David Bowie (not prog, but spacey enough) sings about Major Tom, you can still feel the alienation and hopelessness. Again, quite human. While listening to Foxtrot I kind of felt like an outside observer. I’ll allow that this is probably just me and I have a few more Gabriel-era discs to dig into. So maybe I’ll feel differently after Nursery Cryme, Selling England By the Pound, and The Lamb Lies Down on Broadway.

Now I can’t talk about Foxtrot without mentioning “Supper’s Ready” – the twenty plus minute epic about the apocalypse. It certainly has its moods, ranging from gentle to thunderous, though how else does one capture the end of the world in music? It largely succeeds in being a compelling piece and certainly the gold standard for extended prog jams. I don’t think the band even attempted another one until Duke and they even broke that one up into bite-sized pieces. Nonetheless, if you’re the type that will sit down and listen to a twenty-minute song, you’ll be rewarded with quite and adventure.

So there’s Foxtrot – a legendary progressive rock masterpiece that may take some spins to really appreciate. Even then, you may have to get your tinfoil hat (or sunflower costume if ya gots one) to make sense of it. Technically, it’s just about perfect, but I need a little bit more humanity in my albums and a little less spaceman.

Useless Fact: If you listened to this on vinyl, “Horizons” and “Supper’s Ready” would take up one whole side of a record! Um… I don’t really do vinyl so that’s kind of amazing to me.
Posted by The Old Man at 8:38 AM