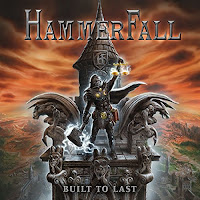 Hammerfall kind of remind me of a metal version of AC/DC or Enya - performers that know their thing and pretty much stick to it. There is nothing wrong with this, especially if it keeps resulting in good music. Built To Last is straight-up, no nonsense, traditional heavy metal. If you like heavy metal and/or Hammerfall, you'll like this. Though I think I might slightly prefer the previous album over this one.

Useless Fact: Is "Twilight Princess" a Zelda reference? I don't know... I'm going to say it is even though the lyrics don't have anything to do with the game.
Posted by The Old Man at 7:09 AM