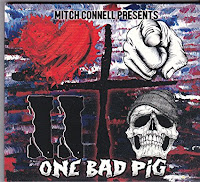 So you're looking at this probably wondering the same thing I wondered when I say it: Who the heck is Mitch Connell?! Answer: someone with more disposable income than me! But seriously, this was a Kickstarter funded album and one of the rewards was to have the donor's name on the cover. So there it is! Mitch Connell! Question is, of course, after all these years does the pig still have much of an oink left? Yeah... pretty much I'd say. In terms of style it's pretty similar to what the guys were doing in their heyday. Of note is the cover of The 77's "The Lust, the Flesh, the Eyes, and the Pride of Life" and the medley of Sunday school tunes - "Sunday Skool Rawk." Also, Les Carlson lends some guest vocals to "Get Your Hands Dirty" and his vocals are always great. Though I confess this one had to grow on me a little and I only really "got it" the other day listening to it at work. Also, I know that another Kickstarter reward was to have a song written for you, but "Ben Moors" is definitely the weakest song here. Other than that I think if you like OBP, you'll like this though I don't think it reaches quite the legendary heights of their past discography.

Useless Fact: Just a heads up, "OMG" stands for On a Mission from God... y'know... in case that was gonna keep you up at night.
Posted by The Old Man at 8:12 AM