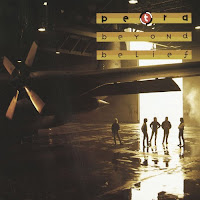 Beyond Belief is, without a doubt, Petra's biggest, most successful album. This was the peak of the John Schlitt years, for sure. It's a monster album and it still holds up today. Heck, even the theology holds up today (except for maybe "Underground"). It's a classic, hard rock masterpiece and there's not much else to say about it. I loved it then, I still love it today.

So I've talked about the Beyond Belief video and poked fun at it for they guy going on the missions trip and it's the best thing ever and blah blah blah. I guess there's a little bit more to the movie than that. The kid's friend gets in a wreck, he has a crisis of faith, resolves it... THEN the missions trip. Anyway, I haven't watched the entire movie in years, this was gleaned from the music videos I pulled up on You Tube one night.

Useless Fact: During this time, drummer Louie Weaver had this thing with Mickey Mouse. It was on his clothes, his drums... he always had something Mickey Mouse around. I have no idea why. Anyone know?
Posted by The Old Man at 9:16 AM