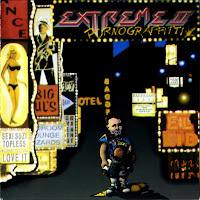 I wasn't a huge fan of Extreme when they first came out. Not sure why other than I was in that "can only listen to Christian music" phase. However, I got it into my head that I needed to hear this whole album because I really like "Hole Hearted." The rest of the album doesn't quite sound like that... it's a lot heavier for one, but it's just as good. The highlight is the guitar work of Nuno Bettencourt. He is one of those guitar talents that is so comfortable with the instrument that it's impossible for him to do something that's not interesting. There's the main riff, then he dances and fills around it like the crazy virtuoso he is. You've also got Gary Cheron's vocals which are also top notch. I guess what I'm saying is that I was a fool to not listen to this back in the day. It's an excellent example of guitar-centered pop rock from that era.

The album is kind of a loose concept record dealing with finding real love in a sex-obsessed world. This is the 25th anniversary edition of this album with an extra disc and liner notes which detail the conception and recording of the album. There's no lyrics though. Ugh! Oh well...

Useless Fact: According to the extensive liner notes in this reissue, Bettencourt did a lot of his songwriting on the toilet.
Posted by The Old Man at 12:40 PM