Jet Circus - "No Mercy For the Living Dead" (Demo) 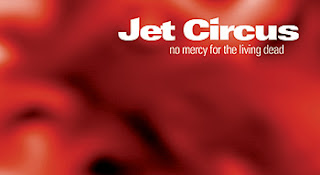 Jet Circus - No Mercy For the Living Dead
1992, Never released

Well, well, well... I finally got it. The mysterious, elusive, REAL second album from Jet Circus. How did I acquire such an animal? Well, it involved a lot of cloak & dagger shenanigans. Overseas accounts. Calls to international diplomats. It was a real 007 operation - but I've got it. And it's.... pretty good, actually! Just hearing Terry singing again filled me with joy. This actually sounds like Jet Circus in a way that Look at Death Now just didn't. I'm still not sure why this wasn't ever released. The rumor mill states that the record company (Wonderland, I believe) was giving them a hard time about it. That's probably because the lyrics on this album are not nearly as overtly religious as Step On It. That's not a problem for me, but back in the day I can see a Christian record exec being a little cagey about lyrics like, "Would you mind if I touched your breast/Kissed your lips and forgot the rest?" (from "Motorcycle Mama"). Granted the song isn't what it might seem just from that line but you can guarantee that people would have gotten their panties all in a twist about it. Also, the sound of this album is just a bit more experimental than the last. Don't get me wrong, there's plenty of that deliciously fuzzy guitar and bass. However, there's also a lot more programmed beats and electronic pop noises. Oh, and "Honey Pie" is a straight-up bluegrass song. Love it. Seriously. I want Steam Powered Giraffe to cover it. "Paradise" is the album's lone ballad and it's kind of boring - though there is some sweet bass lines in it. It's also probably the most "Christian" song on the album. I think that if this had come out in '92 or whenever I probably would have loved it. I really wish the guys would get back together and finish this for old time's sake. Definitely worth hearing if you get a chance to!

Useless Fact: I guess there's also a second version of Step On It with three members in the band and live drums. I will have to check that out as well.
Posted by The Old Man at 8:06 AM