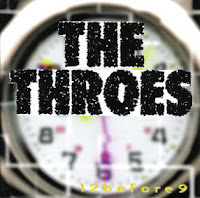 I have some pretty vivid memories of this album. I remember it was spring...around Memorial Day, I think. I remember that I was really having problems sleeping during this period in my life. I'd stayed up most of the night playing Super Metroid. Anyway, I remember my impression of this album being... not very great. I remember thinking it didn't really "sound" like The Throes. I don't know why I felt this way. I also remember that I thought "Words" and "C Is For Cookie" were the best songs on here. So what do I think of this today? Well, I do enjoy it a little more than I did then, but it's never going to be as good as the first two albums. I still hold to the opinion that "Words" is the best track. I think the band agrees with me because it's on here twice. "Reckless Feeling" is about sex. I think the band was trying to court a little controversy because of it and the other song, "So Controversial." Though I don't think there was really very much actual controversy. Definitely not my favorite Throes disc by a long shot. Not as terrible as I thought when I was a teen, but not super great either.

Useless Fact: The band shrinks back down to a three-piece band after being a five-piece band for Fall On Your World.
Posted by The Old Man at 4:42 PM