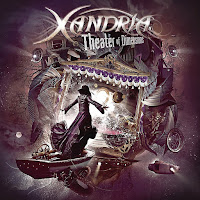 Theater of Dimensions wasn't really on my radar when it came out. Mostly because, while I liked Sacrificium okay it didn't really hit the heights of Neverworld's End. In the end, I listened to samples and decided I would check it out. I'm so glad I did! I can honestly say that this album is a contender for favorite album I've heard so far. Yes, equaling or possibly surpassing the mighty Neverworld's End. I think the songs here are far more engaging and exciting than on the previous album. Each has its own character and a great hook to hang your brain on. Dianne's vocals are amazing - switching from operatic Valkyrie to soft and sensitive to rock goddess on a dime. I think this is also the heaviest album I've heard as "We Are Murderers (We Are)" has a couple sections that are almost death metal. They've still retained some of the Celtic influence on tracks like "Death to the Holy," "Ship of Doom," and "Ceili."

I originally thought this was a concept album but as it turns out it's just the title track. It's an epic 13-minute long epic about a young woman, time travel, and an evil overlord. It's pretty good as well. My version is the deluxe edition with a second disc full of acoustic versions of an assortment of tracks. These renditions are beautiful and really show off how great a singer Dianne van Giersbergen is. I wouldn't say they were essential, but they're a great epilogue to a great disc. One of the first great new releases of 2017!

Useless Fact: This album has some guest vocalists: Bjorn Strid of Soilwork, Ross Thompson of Van Canto, Zaher Zorgati of Myrath and Henning Basse of Firewind. Yeah... I've never heard of those bands either. Though I may have to check them out now.
Posted by The Old Man at 7:52 AM