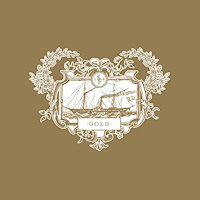 When Gold originally came out people did not like it. I didn't really like it. It was really, really different. Not a different style or anything but certainly a different tone. Whereas the first album was more upbeat and the songs peppier, this album is dour, morose, and slow. While the "wall of sound" distortion and shoegazery-ness (I know that's not a word) is still there, the entire thing is so downbeat and depressed. Back in the day I really only liked three tracks: "A Housewife Love Song," "You're Mean," and "Do You Ever Feel That Way?" - these songs sound the closest to Silver. This album has aged well though and people (including myself) have come to enjoy it a lot more over the years. There's a lot to dig into if you're willing. Though, honestly, I really do have to be in the mood to listen to this one. My edition is the reissue from 2005 with the extra tracks from a couple of EPs from the era, the names of which escape me.

Useless Fact: Rumor has it that this album is about Jason Martin's break-up with Leigh Nash (then Bingham) from Sixpence None the Richer. I think it's a little hilarious that a sweetheart like Leah would get this whole morose album written about her. Maybe someone can confirm or deny the rumor...
Posted by The Old Man at 9:36 AM