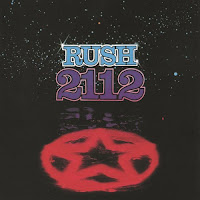 1. 2112
i. Overture
ii. The Temples of Syrinx
iii. Discovery
iv. Presentation
v. Oracle
vii. Soliloquy
viii. Grand Finale
2. A Passage to Bangkok
3. The Twilight Zone
4. Lessons
5. Tears
6. Something For Nothing

I don't know why I've given Rush so many chances to hook me. They've always been a band that I feel like I should like, but I've never gotten into them. I watched the Rush in Rio DVD way back in the day in college. They put on a great show but I wasn't hooked. Last summer I bought the Working Men live album collection to see if that would do the trick. I liked it okay, but still not engaged. So...finally, I picked up the band's seminal album, 2112. I thought that maybe if I listened to one album in its entirety that might help. Also, 2112 is a prog-rock classic so I kind of wanted to listen to it anyway.

2112 is wonderful. I really enjoy it. I'm not sure why this is what did it, but I'm glad it did. Everything clicked. I got it. The title track earns its prog-rock reputation and then some. I understand why this album is so highly praised. It's excellent. I've always known Geddy Lee for his distinctive vocal style but he really is a monster on the bass. Neal Peart and Alex Lifeson are no slouches either - both masters at their crafts. I don't know if I'm a total Rush fan yet, but I'll definitely be checking out more of their studio albums in the future.

Useless Fact: I was listening to this at work and instantly got a Mystery Science Theater 3000 joke from twenty-five/thirty years ago. The joke: (from Tom Servo) "Neal Peart on drums." Guess which episode it's from!