A Tribe Called Quest - "We Got It From Here...Thank You 4 Your Service" 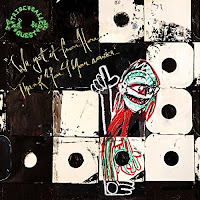 I picked this one up on a lark when I bought Lady Gaga's Joanne at Wal-Mart. A Tribe Called Quest was a group back in the day that was only on my radar because they were perceived as being one of the more artsy and intellectual hip-hop groups from the time. So I saw it and realized I didn't really know who was good in modern hip-hop anymore and picked it up. I kind of wanted to challenge myself with something out of my wheelhouse. Okay... so an older group from the 90's isn't exactly "challenging myself" but whatever.

Anyway, I like this! It's reminiscent enough of the stuff I used to like - with smooth beats, cool samples, a sense of melody, with a more modern sound and production. Also, much to my surprise and delight, Busta Rhymes is here! Not sure if he's a member of the group or just a guest. Also, the lyrics are challenging and thought provoking which is pretty much what I was hoping for. I would definitely be apt to add a few more Quest albums to the vault. Anyone have any ideas which ones are their best?

Useless Fact: I know next to nothing about this group other than the main rapper, Q-Tip, performed with the Beastie Boys and was on Deee Lite's "Groove is in the Heart."
Posted by The Old Man at 7:54 AM