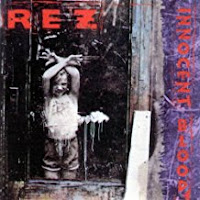 Way back in the day my cousin and I used to make copies of the tapes we'd buy and exchange them with each other, thus doubling our music collections. Innocent Blood was one of the tapes she'd given me. When I was young I only liked the first two tracks. "Rooster Crow" is a short little acoustic opener. "Altar of Pain," however, is a monster metal tune - heavy and fierce. For some reason I didn't like the rest of the album. I chalk this up to youthful stupidity. This album is amazing. I'd never really gotten into the Resurrection Band in my youth. Now I'm kind of kicking myself. I'm not sure what motivated the band to go into the hard rock/metal category after being new wave or whatever they were, but it totally works. They've also mixed in a lot of blues as Glenn and Wendy Kaiser were always blues people to begin with. Now I want more Resurrection Band. There's a cover of The Who's "Bargain" here which always reminds me of my hometown because some local car dealership always used that song in their commercials. I also played a good bit of Mega Man 2 while listening to this album along with Whitecross' Triumphant Return. See, the my cousin gave me copies of both at the same time.

Be careful if you're trying to get copies of Rez's albums. I bough this "new" off Amazon and didn't look closely enough - it's a CD-R. They say it's a CD-R but I didn't pay close enough attention. Ugh! Now I have to find a real copy for the vault!

Useless Fact: The band was originally Resurrection Band but shorted it to Rez starting with Silence Screams. They went back to their original name for Lament.
Posted by The Old Man at 8:00 AM