Testament - "Brotherhood of the Snake" 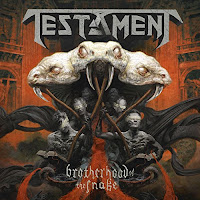 Brotherhood of the Snake was another album I bought just because people said it was good. And, by George, it's the finest bit of thrash music this side of Anthrax. It's not quite as excellent as Anthrax's For All Kings, which came out earlier the same year, but it's right up there. An impressive, quality thrash record I say. The big attraction here is the tasty riffage served piping hot with a nice meaty, crunchy guitar tone and plenty of face-melting leads. The lyrical direction is pretty steeped in conspiracy theories and such. It's interesting fodder for discussion though. I'm always fascinated by conspiracies even though I'm not a believer in them for the most part. "Seven Seals" is a full on recounting of the book of Revelation - in which the band sings about Christ's ultimate victory. Weird for Testament (who are NOT a Christian band at all), but not unwelcome. You'll notice Flotsam & Jetsam have a song called "Seventh Seal" that deals with the exact same subject matter. Both albums released in 2016... must have been something in the air I guess. Anywho... go pick up Brotherhood of the Snake because it's awesome and well worth your time.

Useless Fact: I guess there was some tension in the studio while the band recorded this record. I don't think they had full songs when they went in and wrote as they went.
Posted by The Old Man at 7:39 AM