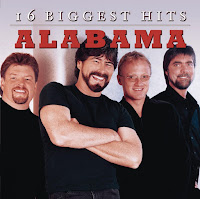 I bought this CD in New York while I was in town because my father had passed away. I saw it in Walmart and couldn't help think back to all the car trips in and around the hills and valleys of upstate New York listening to Alabama. Them, along with Kenny Rogers, Dolly Parton, Oak Ridge Boys, Ronnie Milsap, Charlie Daniels and others formed a lot of the soundtrack to my youth. I got this as a way to honor dad in my own weird way and also to see after all these years (and my avowed hatred of country music) if I could get into this at all.

Some of the songs I remember liking as a boy I still like - "Mountain Music," and "Roll On (Eighteen Wheeler)" provided the most vivid jaunts down memory lane. I liked those as a kid and still do kind of like those songs. What surprised me the most listening to this album was that the more country the song was, the more I liked it. Take "If You're Gonna Play In Texas..." for example. It's a very country, almost bluegrass song and it ended up being one of my favorites. Unfortunately the lion's share of material on this collection is their radio friendly adult contemporary ballads and what not. These songs are boring as dirt. "Love in the First Degree" and "The Closer You Get" come to mind. I guess that's why I liked the honky tonk songs a bit better - they had some character and were pretty unique. The rest was just radio fodder from the Eighties. Some day it might be worth my time to assemble the songs I like into a playlist and make my own 16 Biggest Hits.

Useless Fact: I noticed that another song of my youth: 40 Hour Week (For a Livin') wasn't on here. How was that not one of the sixteen? Also... Alabama sure did love parentheses didn't they?
Posted by The Old Man at 8:07 AM