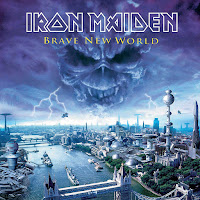 1. The Wicker Man
2. Ghost of the Navigator
3. Brave New World
4. Blood Brothers
5. The Mercenary
6. Dream of Mirrors
7. The Fallen Angel
8. The Nomad
9. Out of the Silent Planet
10. The Thin Line Between Love and Hate

I haven't gotten into a lot of Iron Maiden's later period... Book of Souls notwithstanding. Mostly because I'm not sure what's good. There was a period where Bruce Dickinson left and they put out some albums that have gotten really horrible reviews. I heard through the grapevine that this one was pretty good. It sees Bruce Dickinson back on vocals so that's something. It's not too much of a stretch to say that if you liked the classic Maiden sound then you'd be pretty happy with Brave New World. I know I was. I can see where their penchant for extended galloping jams was really starting to develop. Several songs have extended sections with leads and choruses that could have probably been trimmed by a minute or two. Still a solid Maiden album, though.

Useless Fact: "Out of the Silent Planet" is the title of a novel by C.S. Lewis. I don't think the song is about the book, but I could be wrong. The case can be made, I think.
Posted by The Old Man at 8:02 AM