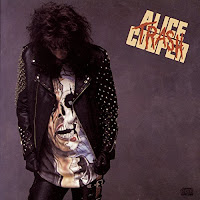 I remember seeing a lot of "Poison" on MTV back in the day. Of course, as an innocent young lad I had no idea of the scope and breadth of Alice Cooper's work. I liked that song and that was pretty much it. Though it did really well on the old countdown shows they used to have...can't remember how high it got, though. Aww...remember video countdown shows? I totally miss those. Anyway, this is another of Alice's commercial hard rock platters that conforms to the style of the era. Trash is brazenly sexual - not necessarily vulgar, but definitely sexual. Some of Cooper's hallmark "horror vibe" is kind of missing here, which is a shame. That's not to say the album is bad - it's not. The songs are all good with good hooks and performed by competent, professional musicians. It's a solid album but I don't think this will be my go-to album when I need an Alice fix.

Useless Fact: Bon Jovi has some songwriting credits on this album.