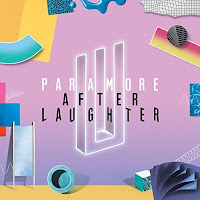 Paramore - After Laughter
2017, Fueled By Ramen

In my mind, Paramore holds a distinct honor that few bands hold. That is, they've gotten better and better with each release. This culminated in 2013's self-titled album which mixed their original alt-rock sound with pop sensibilities. I found it to be the peak of their career at the time - their final form, if you will. What could the band do that could top that? How could they get even better? Answer: reinvent themselves. This is always a dangerous proposition, as Linkin Park is finding out. Paramore, however, have pulled if off with their usual aplomb. Despite jettisoning all hints of their former alt-rock past, the band has crafted a bright, catchy Eighties throwback pop record. It's immediately recognizable as Paramore but still different from anything they've done before and certainly different from anything on the radio right now. I think that's where Linkin Park erred. Their new album sounds like the usual dreck you hear on the average Top 40 radio station. Paramore, on the other hand, sounds like what you might hear on the radio thirty-some odd years ago. This is a good thing. It's also not really out of left field as a few tracks on the last album kind of hinted at the direction this album took. It's weird because it seems like each song demonstrates some trope of Eighties music but it doesn't come off as ingenuine or pandering.

Now despite the bright album artwork and the upbeat, luminescent instrumentation After Laughter is pretty dang depressing. From the opening notes of "Hard Times" to the moody longing off "Tell Me How," this disc is an ode to bleakness. "For all I know/The best is over and the worst is yet to come..." begins "Told You So." I like the contrast between the music and the lyrics, however, and I think it's just one more thing that makes this record stand out from the crowd. So yeah... four great albums in a row. That's a hard thing to do even for the best of bands. My hat is off to Paramore and hope we've got many more years of albums to look forward to.

Useless Fact: The band put together a playlist of songs that inspired this album. Many Eighties bands make appearances. I know...shocking.
Posted by The Old Man at 7:51 AM