Rose - "Songs for the Ritually Abused" 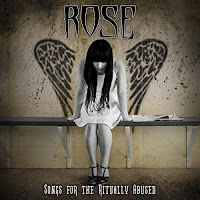 1. The Tortured Girl/Bye Bye Hands/Songs for the Ritually Abused
2. Keep You To Myself
3. Medication
4. Whispering Whales
5. Kellan and the Illustrator
6. Mickey
7. The Girl
8. Monster
9. Hell's Locked From the Inside
10. When Will I Be Loved?

Remember back in the 80's when there was a big scare (especially in the Church) about satanic ritual abuse? Lots of books written, documentaries made, etc. Bob Larson's Dead Air comes to mind. Despite all the panic it seemed that this phenomenon wasn't as widespread as the paranoia would've had us believe. So... it seems odd that in this day and age Randy Rose and crew would make a concept album about ritual abuse. I mean... that's not something that really happens, right? Though on the other hand, I know the human heart and I also have a hard time believing that it doesn't happen. I guess I'm in the middle about it, was the point of all that.

The music is dark and murky. If you're were a fan of the band's brand of stoner rock/doom metal, then you'll be pretty at home here. This time out, Randy and co. add a few more influences to really spice things up. You'll hear a lot of Queen and even maybe a smidge of King's X. The production is loud and full of fuzz and Randy's vocals, while recognizable, are much more varied. Surprisingly, a couple of the album's best moments come in the form of piano ballads - "Kellan and the Illustrator" and "When Will I Be Loved?" - are heart breaking and poignant. If I'm being honest (and a little bit nitpicky) I could have used another full on faster paced rocker like "Medication." However, as it stands, Songs for the Ritually Abused is a tragic gut-punch of an album conceptually speaking but sonically very compelling and well worth your time. Even if you don't believe in ritual abuse.

Useless Fact: Most of the band these days consists of Randy's wife and kids.
Posted by The Old Man at 8:26 PM