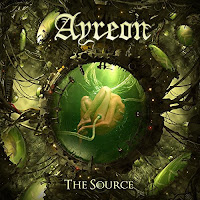 DISC TWO
1. Aquatic Race
2. The Dream Dissolves
3. Deathcry of a Race
4. Into the Ocean
5. Bay of Dreams
6. Planet Y Is Alive!
7. The Source Will Flow
8. Journey To Forever
9. The Human Compulsion
10. March of the Machines

So let's talk about comics for a second, yeah? If you're a fan you'll know that every so often a comic book series will kind of "start over" either totally with a new number one issue or just sort of clear the way with a simple story. These are usually intended to be jumping on points for new readers. They're designed to be read without having to know all the lore beforehand. I bring this up because I think The Source is...you guessed it... a great jumping on point for new listeners. It's sound is quintessential Ayreon. If you know someone who's every been curious, you can hand them this album and they'll get an excellent overview of what Ayeron is all about.

Some of the reason I say this is because the music is a bit more accessible as well. As a whole I don't think it's as long as previous Ayreon albums (not that that's a bad thing). It's also a bit more traditional in structure with a lot of anthemic choruses and catchy riffs. The focus of this album seems to be two-fold: more guitar and heavier guitar. In fact, I think this is the band's heaviest album to date. This is in stark contrast to the more melodic and progressive The Theory of Everything. While I say this album is the heaviest I don't mean to say there aren't slower, melodic parts because there are - and they go well with the crushingly heavy riffs the album is built around. There's also a lot of faster paced, full on metal songs like, "Everybody Dies," "Run! Apocalypse! Run," and "Planet Y Is Alive!." Arjen said that he thought this album would originally be a Star One album because it was so heavy but that he came up with too many proggy, slow parts for it to really be a Star One disc. He's also said that every album is a reaction to the previous album, which I've said was the more complex Theory. I don't think I've ever been disappointed by an Ayreon album and that still holds true with The Source. So to all you Ayreon-ignorant people out there - the train is pulling up to the station. It's time to get on and experience the wonderfulness that is Ayreon.

Useless Fact: Arjen usually records the vocalists in his own studio, The Electric Castle. However, this time more of the vocalists couldn't do that due to time restraints so only a few of the artists recorded at the Castle. The rest worked in their own studios.
Posted by The Old Man at 7:54 AM