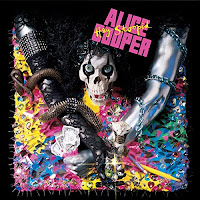 So here's something weird - Hey Stoopid does pretty much all the same things as Trash but I like it better. Again, there wasn't anything wrong with Trash, it just didn't do a lot for me. Another weird thing because it's totally 80's and you would think I'd be all over it. But, nope. Hey Stoopid for some unexplainable reason was more likable and catchy to me. I think this one might actually more commercial too. Yeah... I don't know. I do want to point out the cool guitar part in the verses of "Might as Well Be On Mars." I think this album also has more of the creepy Alice Cooper feel too (especially in "Wind-Up Toy"). I'm not sure this one will rank up there with my top Cooper platters, but it's definitely in the upper B-tier.

Useless Fact: Alice Cooper was in Wayne's World. "Feed My Frankenstein" was featured in the movie as well. Though I'm sure you probably already know that.
Posted by The Old Man at 7:55 AM