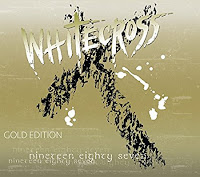 I never purchased or listened to Whitecross's debut album back in the day. I don't know why. I guess I figured I had Triumphant Return and In the Kingdom so I didn't need anything else. I didn't even get it the second time it came out in 2005 - newly rerecorded with beefier and more modern production. Chalk it up to my wanting to archive things I finally picked up the Gold Edition of Nineteen Eighty-Seven. I am a little disappointed in myself that I waited so long to pick this up. There's nothing like listening to a shredder like Rex Carroll - a man wholly at one with his instrument. He is a true virtuoso that will probably never be widely recognized as a guitar hero because of his "Christian" status. Have I said that before? I feel like I said that before. It doesn't matter, though, because it bares repeating. The more modern production of the rerecording only helps highlight Carroll's considerable chops. I do kind of wish the Gold Edition came with some lyrics or liner notes or something. Also, I'm not wild about this move over to cardboard sleeves for everything. I know it's cheaper...but I like my stuff to have some weight, y'know?

Useless Fact: There are some outtakes at the end of the CD which are interesting once. There's also "Scott's Rant" which is basically telling people they shouldn't be looking for the devil, they should be looking for God. This was back when people were really upset about backward masking (that's when you have a vinyl record and you purposely spin it backward and it makes weird noises, kids). I can't remember if that message was actually on the debut album as a real backward message or what. Still a good point, I feel, in this day and age when a lot of Christians are busy looking for the devil in everything up to and including Pokemon Go.
Posted by The Old Man at 8:00 AM