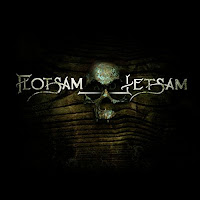 Flotsam and Jetsam have a history that extends way back into the early Eighties. Unfortunately, while I'd heard their name on occasion (mostly in connection with Jason Newstead), I'd never actually heard any of their music. So why did I pick up this CD? Mainly it was because Scott Waters of No Life Til Metal said it was really good. You know what? He is correct. This is really good. I'm not sure if F & J are a full on thrash band or just heavy metal but they skew the line between the two, I think. They've even got some NWOBHM influence with "Iron Maiden" which I think is a cover but I'm not sure. It definitely sounds like it could be an Iron Maiden cover and I know they had a song called "Iron Maiden." However, I am just too lazy to look it up. I really love vocalist Erik A.K. - he's got his own style that is somewhat reminiscent of Bruce Dickenson but with a little more thrash grit. That's not to say he sounds exactly like him, but you'll know what I mean when you fire up "Iron Maiden." Also, the band has some really good groove in their riffs, especially in tracks like "Life is a Mess" and "Time to Go." I may just go ahead and start looking into their back catalog because Flotsam and Jetsam is really good.

Useless Fact: Not really a fact about the band, but back in upstate NY where I grew up, the local FYE had a copy of F & J's My God album. I never bought it but always wondered if it was good. What if I would have bought it then? I could have been an F & J fan this whole time!