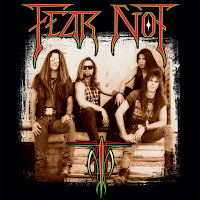 I'm glad that Fear Not's one and only release has been reissued. I'm also glad that Roxx put some real time and effort into this one. I've mentioned how this band missed being the next big thing by a couple years. This edition highlights everything the band got right and why it's such a shame they never got the recognition they deserved. Everything here clicks. The guitar tone is nasty and thick. The production is spot on. The song-writing is top notch and ultra-catchy. The cover has been reworked into something more metal and it looks great (though I never had a problem with the old cover art). We've even got some bonus tracks that sound pretty good - a bit more modern, for sure. Kind of like what the band might have done in like '95 or '96 had they had the chance to do another album. Oh! And the liner notes! Full booklet with lyrics and an interview from Larry Worley! Were they just the Christian version of Skid Row? Um... a little... but they pull it off with finesse and style and this album is fantastic. I'm glad I can finally replace my original version (it suffered from water damage and CD rot).

Useless Fact: I guess except for a few shows here and there the band never got to actually go on tour. Another shame...
Posted by The Old Man at 3:02 PM