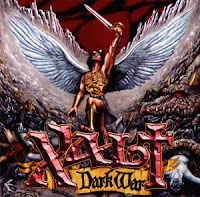 I'm mostly familiar with Xalt through their third album, History, and the totally awesome cover art for Under the Ruins. I was aware of Dark War mostly because of its cool cover art and the fact that it was never released on CD. I never saw this album around anywhere either. Though I think this was more of an independent release before the band was signed to Pure Metal. Well, unlike more pop/hard rock direction of History, this album is well... pure metal. It's one of those albums where the passion of the players shines through the rough production. You can tell this was a labor of love with every note. It also helps that the songs boast some impressive guitar work along with Scott Doerfler's soaring, clear vocals. I keep coming back despite the all the tape hiss (hey... you can only do so much when putting a tape on CD, y'know?). This edition comes with some demos for Under the Ruins. They kind of got me hoping Retroactive is planning on reissuing that album as well.

Useless Fact: In the liner notes, guitarist James Erdman admits that "Looking Down a Loaded Gun" sounds a bit too much like Dio's "Straight Through the Heart."
Posted by The Old Man at 8:16 AM