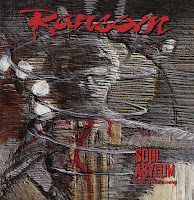 For Ransom's second album the trade in the shiny, metallic sounds of the debut for something a bit more earthy, organic, and bluesy. It leans a little more towards the hard rock side than the metal side. This is not a negative however as the slight shift gives vocalist Lisa Faxom even more room to shine. She was truly one of the hidden gems of the Christian rock scene. I don't think she ever got the kudos she deserved. I have grown to prefer this album over their first. Soul Asylum was the band's last album. A shame...as I think if there was a band that could have still sounded good during the alternative days it's this one. This edition is a reissue from Roxx Productions with lyrics and liner notes and everything. Good job, there! I always like when reissues have the whole package. I guess this one was strictly limited to 300 copies - mine is #74.

Useless Fact: Not really a fact... more a question. What ever happened to Lisa? We've got some recollections from bassist Michael Preciado but I'd hate to think that she stopped singing after Ransom ended.
Posted by The Old Man at 12:32 PM