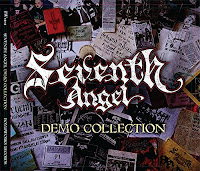 Red Demo:
1. Heed the Warning
2. In the Name of Christ We Rock
3. Betrayer
Rehersal Demo:
4. Dr. Hatchet
5. Divine Takeover
6. Betrayer
7. Locked Up in Chains
Heed The Warning Demo:
8. Forbidden Desires
9. Seven Angels Parts I and II
10. I of the Needle
11. Heed the Warning
Dust of Years Demo:
12. Lamentations
13. The Turning Tide

The Demo Collection is just what the label says - a collection of the band's first three demos with a couple from The Dust of Years as a bonus. The sound quality is pretty decent for being demos and it's kind of cool to hear a couple tracks the band never released on a studio album. The best of the bunch remains the Heed the Warning demo. Of course we already got that with the previous demo collection. I'd say this is mostly for avid fans and collectors like myself. The package is pretty cool - a big fold out digipak - with some notes on each demo by Ian Arkley.

Speaking of which, he says in the notes for the Rehersal Demo that he hates the lyrics to "Dr. Hatchet" which he calls, "a song about big subjects written by someone with infantile opinions." He goes on to say that no matter what one's stance on the issue there are better ways of expressing it. I just think it's pretty interesting he would say that. As my own opinion on abortion has changed. I mean... I still hate it. Hate it. But instead of yelling at people about how bad it is I am much more of the mind that we should listen and help. Don't tell an person wanting an abortion that they are evil for wanting one. Offer to help. Make abortion the bad choice by creating better choices. Yelling at people and shoving ghastly imagery in their faces had been tried and it has not been successful. Perhaps we should try something different, yes? So I guess I agree with Mr. Arkely - like the song, but the I'm definitely not as wild about the lyrics.

Useless Fact: Not a fact about the band, but "Seven Angels" is one of my favorite Seventh Angel songs. Too bad it never saw an official studio release. Also... if I didn't say this already "Heed the Warning" and "Seven Angels" appeared on the compilation Last Ship Home. A comp I want just for the Rodney Matthews cover art.
Posted by The Old Man at 8:43 AM