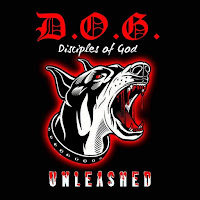 I heard about D.O.G. from Scott Waters' You Tube channel. I was pretty sold on the samples I heard. D.O.G. play a brand of old-school heavy metal that sounds not unlike Motorhead or Kill 'Em All-era Metallica. It's pretty stripped-down and no-nonsense. Maybe a little too stripped-down, though as there definitely seems to be something off with the mixing and mastering. I'm not sure if these are demo tracks Roxx decided to put out as is but it definitely sounds like it's maybe not mastered properly? I don't know. Maybe it's just the speakers in my car. Anyway, don't let that stop you as it's not unlistenable and the rough production actually feels genuine to the sound. I'm hoping these guys get a chance to do a full studio album as I think Unleashed shows some great potential.

Useless Fact: D.O.G. features ex-Holy Soldier drummer Terry Russell on drums and vocals. You'll remember Terry is the one who did one of the best drum solos at a concert I've ever seen.
Posted by The Old Man at 7:36 AM