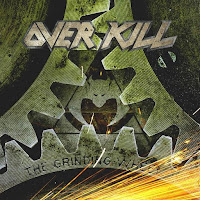 So as is sort of becoming an annual tradition, I've been trying to catch up on some of the albums from last year that have made various people's lists. Overkill's The Grinding Wheel was one of them. I've never gotten into them even though they've been around for a long, long time. The Grinding Wheel definitely delivers a pummeling thrash experience with a nice thick, meaty guitar tone and some infectious riffs. Yes... the guitar-work here definitely made me smile. However, there were a couple things that I had an issue with. First, the vocalist is... kind of strange. It doesn't always work for me - especially his higher range. My wife and Lexi say he sounds like a Dalek from Doctor Who. Truth be told... he... kind of does. Sometimes I'm not sure whether this is a plus or negative. Also, some of the lyrics are odd. I can't explain it but something just seems off about some of them. "Someone left the cat out in the rain" from "Shine On" is a particular favorite. Despite these niggling little things I really do like The Grinding Wheel but I don't think I'm going to be an Overkill die-hard soon.

Useless Fact: I've heard they have sort of a rivalry going with Avenged Sevenfold due to the similarity of that band's logo with theirs.
Posted by The Old Man at 7:51 PM