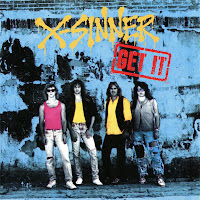 I remembered more about the circumstances of my borrowing this album from my cousin than I did the album itself. It was a Wednesday night and my first real girlfriend had her friend call me a couple hours before church to break up with me. Not my first experience with heartache, but it still stung. I then got to watch her at church that night fawn over some other guy the whole time. Fun. Oh! and also the U.S. began Operation: Desert Storm that same day. January 16th, 1991 - I know this because there's a Fluffy song about it called "1/16/91." I mostly remember listening to this album with that weird hollowed-out feeling you get when an important relationship ends.

Where was I? Oh, yeah! The album! It's pretty much Christian AC/DC, right down to the vocalist who does a spot-on version of Brian Johnson. Seriously, if you played "Medicine" for someone not in the know they'd think it was some lost AC/DC track from the Back In Black sessions. Or maybe The Razor's Edge sessions. I mean... it's AC/DC, does it really matter? To the band's credit, they do a pretty good job with solid hooks and interesting riffs. "No Way In" is notable in that it backs off the AC/DC for a second to be its own thing. Also, "Livin' On The Edge" sounds a bit more Def Leppard than AC/DC. This album is way out of print as of now - even the reissue is pricey.