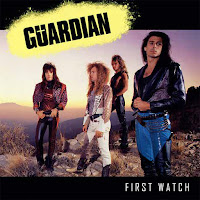 I never got to hear First Watch the first time around. I remember my cousin got it and listened to it. She didn't think it was that great. Based on her word I never gave it a second thought... that is until last year's reissue. I got it in my head that I needed to hear it and I'm glad I did. It's really good, actually. Take that cousin from thirty years ago! Being produced by Oz Fox this album has a little bit of Stryper in it. Mostly, though, revel in the sweet guitar licks of Tony Palacios. He actually reminds me a little bit of Nuno Bettencourt from Extreme. So... solid hooks, great riffs... pretty much great all around.

Except the vocals. Let me be clear - the vocalist isn't bad. He's not. It's just... I've heard Jamie Rowe. He's got such a distinctive and powerful voice it's hard not to listen to this album and wonder how much his presence could have elevated it. Now, it's not the band's fault, Rowe just wasn't around but it's definitely a handicap for a listener who started with Fire and Love. Paul Cawley's clear, slightly nasally tone just doesn't hold up. It doesn't make this album unlistenable - I'm really glad I got to hear this. I just wanted to note the trouble I had because I think not a few listeners will have the same problem.

Finally, Retroactive has really been knocking it out of the park with these reissues. It's got everything you could want, liner notes, an interview with bassist David Bach, lyrics. It makes me happy. Also, I pre-ordered so mine came with an album cover card signed by Bach.

Useless Fact: Apparently the label held on to this album for a year and made the band tour to generate interest.
Posted by The Old Man at 3:32 PM