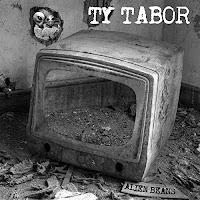 If you're a regular reader of this blog you probably already know how I usually feel about solo material from King's X members (it's...no bueno). Though Jerry Gaskill's Love & Scars was wonderful. I initially wasn't really interested in Ty's new solo album - that is until I heard the riffs to "Freight Train" and "Johnny Guitar." Man... that is some good stuff... very King's X. In addition, I found out this album was going to come with a second disc full of remastered tracks from Ty's earlier solo albums. It seemed like a good value, so I dove in. Turns out I do like Ty's solo stuff after all. The first disc is solid. Miles and away better than the last solo album of his I heard (Safety... like... AGES ago!). I was surprised, though, at how much I liked the second disc. Both discs fit together so well that if you didn't know disc two was older songs you'd never know. It makes me want to check out those other albums to see what I missed! Is my opinion starting to change on King's X solo material?! Parrish the thought! I should probably listen to some of Dug's stuff to see if I've been missing great music this whole time.

Useless Fact: "Alien Beans" is the name of Ty's studio if you didn't know that already.
Posted by The Old Man at 8:11 AM