Marmozets - "Knowing What You Know Now" 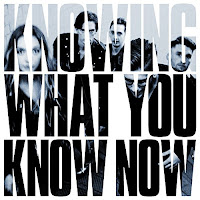 Man, I was a little worried about this band. After the stellar Weird and Wonderful I was hoping this band would have a nice long life. Then...nothing for awhile. Thankfully, my fears were unfounded and here we are four or so years later with Knowing What You Know Now. Marmozets' sophomore release finds them doing more of the same intense, frenetic hard-edged alternative rock that I grew to love with the debut. However, I think they've dialed back the intensity and technicality just a notch in favor of a slightly more commercial sound. Becca has also changed her vocals a touch, affecting a sort of child-like cutesy-poo style in the slower songs "Insomnia" and "Me & You." It was slightly off-putting at first but I got used to it. She's also doing a bit less growling. It's a good album to be sure and continues on what the band built with their first album. So... the problem might be on my end. I like it. I do. I just... it's not sticking with me like the first one. Weird and Wonderful just dominated the playlist for a month or two. This one? I'm not as motivated to go back to it. I'm hoping this is temporary and I just haven't given it enough time to grow on me. I still totally recommend it and hopefully you'll take to it quicker than I have!

Useless Fact: Not a fact - more of a wonderment. As in, I wonder what the religious stance of the band is? Like... I don't know but they seem to have some basis of belief in something but beyond that I don't know. They've never talked about it in interviews that I've seen so I'm just kind of going with my gut here.
Posted by The Old Man at 7:00 PM