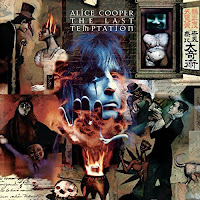 The Last Temptation is Cooper's concept album about his conversion to Christianity. You'd think this would be right up my alley. Me too... like I'm surprised at how much this one just doesn't do too much for me. I like "Sideshow" and "Lost in America" a lot, but the rest of the album...meh. Not that I hate this album or anything, I'm just very neutral about it. Even Chris Cornell's appearance didn't do too much for me. Maybe it will grow on me over the years...

Useless Fact: There was a comic or graphic novel made to go along with the album. I remember seeing it somewhere but I don't think I ever owned it.