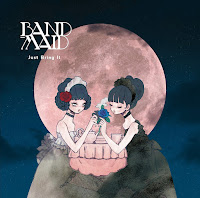 So I've known about Band Maid for a long time. Saw some You Tube videos about them around the time I was getting into Baby Metal. They were good and I always meant to check them out but never got around to it. I guess it took The Rock Critic to kind of kick me in the pants and get me to give them a closer look. Dude... they rock! Like... dang these women have chops. Insane leads, pounding bass, great drum work, and plenty of hooks. Just check out the opening lick in "Memoria" if you want an idea of what I'm talking about. Like I said about Baby Metal, I don't usually like foreign language music but this is too good for it to matter. I even like some of the more pop/rock tracks like "Ooparts" and "Awkward." The latter being one of my favorite tracks on the album, period. They've got a new album coming out this year as well and you bet I'm going to be getting that one too.

Useless Fact: The liner notes come with both the Japanese lyrics and an English translation. Very cool. Though, I ain't gonna lie - I'd give up the English lyrics for some pictures of the band.
Posted by The Old Man at 7:47 PM