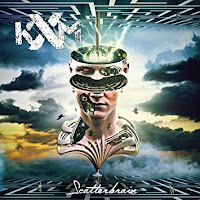 KXM is another side project of King's X bassist/vocalist Dug Pinnick. It also features George Lynch from Dokken on guitar and Ray Luzier from Korn on drums. The combination is pretty good, I'd say. It's always great to hear Dug's vocals on...anything really. George Lynch offers some cool licks and Ray is a monster on the drums. It's an enjoying listen and packed with all the talent you'd expect from such a group. So... the problem might be on my end. I liked it well enough but it never really got its hooks in me after multiple listens. I don't see myself going back to it again and again. Time may prove me wrong (it often has) but as of now I can say I liked it but I didn't love it. That being said I'd still recommend anyone check them out - you may have better luck than I did.

Useless Fact: K is for Korn, X is for King's X, and M is for Lynch Mob. Just in case that was keeping you up at night.
Posted by The Old Man at 7:36 PM