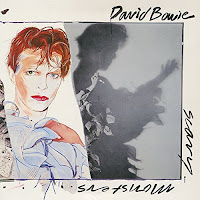 If you’re a regular reader you might remember the Genesis Project from 2016. I had a lot of fun with that and I always meant to do a David Bowie Project. Unfortunately, life had other plans and I never got around to it. Despite Mr. Bowie not getting his own official project, I still wanted to do something because I needed an excuse to buy some Bowie albums. So this is a sort of David Bowie Project lite, if you will. I can’t guarantee a Bowie album every month – the release schedule is: you'll get 'em when we finish 'em. This is because I am doing something a little different – a team review with my friend Uvulapie! We’re going to trade off thoughts and see how it goes! I’ll go first –

The Old Man: First off, I admit Scary Monsters is probably a strange place to start. I have no defense except that “Ashes to Ashes” is one of my favorite Bowie songs and it’s on this album. It also has “Fashion,” which is another well known and well liked Bowie tune. So… here’s the thing. I like Scary Monsters, I really do. But I don’t love it. I’m not sure what my deal is. Maybe my expectations were too high. I was expecting to just be floored but I wasn’t, even though I liked what I heard. There are a couple songs I’m not wild about either, particularly “Kingdom Come” (which is a cover), “Up the Hill Backwards,” and “Teenage Wildlife.” On the other hand I loved “It’s no Game” (both parts), the title track, and “Scream Like a Baby.” Maybe I should have gone with a different album to start with?

Uvulapie: Scary Monsters is a great start for me because it was the first album where I became aware of David Bowie as an artist.  It was late 1980 and this new channel called MTV was on cable (yes, I’m about a decade older than The Old Man which makes me, what…  The Older Man?)  They played the video for “Ashes to Ashes” and as a kid I really liked monsters so the name of the album caught my eye.  And so did the video.  By today’s standards it’s laughably lo-fi but, being the consummate artist that he is, Bowie was able to create images that stuck in my brain for decades, images of ghostly clowns on some martian landscape.  But instead of following up on this Bowie fellow my fifth-grade self plunked his money down to get Love Stinks by J. Geils Band, a video that starts with a guy using two fish as drum sticks.  Which is all to say that I heartily approve of your choice.

The Old Man: First of all you’re not the “Older Man” you’re the…Ancient Man! Haha! Get it? Because you’re SO MUCH OLDER than me! *ahem* Anyway, I never got to see any of the videos from this album but there are plenty of pictures of Bowie in the clown costume in the liner notes of my version of the album. Here’s one random thing I noticed – Bowie’s vocals in “It’s No Game (Part I)” are pretty desperate and ragged. The vocals in “…Part II,” however, are far more restrained – as if the singer is just trying to get his bearings of the situation he’s in. I’ve wondered why put the desperate vocals first? It seems like we get the end of the story, then the beginning. Which, now that I think about it is a pretty David Bowie thing to do.

Uvulapie: BALDERDASH!  Actually I never even noticed the change in vocal tone so one point for The Old Man.  What I did notice were all the guitar noodlings of Robert Fripp.  ALL.  OF.  THEM.  In songs like “It’s No Game” which is one part song and three parts Fripp.  They’re also in “Up The Hill Backwards” which sounds like a sing-a-long that would be sung around a camp fire.  Enough with the Frippery, already!  On the plus side are the creepy wavering piano tones and the slap bass of “Ashes to Ashes”, the immensely urgent and memorable melody of “Fashion”,  the weird warped spoken parts of “Scream Like a Baby” (plus the cowbell), and the authentic jangly eighties synth vibe from the intro of “Because You're Young.”  And how can you not enjoy lyrics like “Little metal-faced boy / Don’t stay away.”   But I fear that I’m agreeing too much and we all know that dissension makes for more interesting reading.  So hey, Adam, “Teenage Wildlife” is da bomb!  How can you not like Bowie singing an incomplete song like a bored lounge singer?  That’s not laziness… that’s genius!

The Old Man: "Teenage Wildlife" is...long. Too long. Even though I think it does a good job of evoking 50's Americana, I just don't care for it. I'm not sure if it's the pacing or length or what. Though now that it's walking around in my head I feeling like listening to it again. Maybe my opinion will change? Anyway, the synths in "Because You're Young" are actually my least favorite part of that song! I noticed you'd didn't say anything about "Kingdom Come." I think if you said you liked it I'd have to drive to your house for a fist fight. Haha! Just kidding! (Sort of!) So all in all it seems Scary Monsters is a bit of a mixed bag. "Ashes to Ashes" will remain one of my favorite Bowie tracks of all time. However, as a whole it seems to leave a bit to be desired. It wasn't the complete revelation that I'd hoped it would be, but there's still plenty more Bowie to dig into.