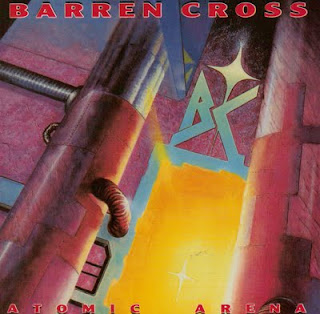 Despite the fact that Barren Cross was essentially the Christian version of Iron Maiden, and Mike Lee's voice was a dead ringer for Bruce Dickenson, this is still an awesome metal album. The lyrics are a little cheesy in spots (like in "Cultic Regimes" where Mike Lee sings "...so millions of lives would LIVE!"), but you've got some full throttle NWOBHM tunes like "Killers of the Unborn" and "Dead Lock" so it evens out. Let's not forget "Close to the Edge" which is another of my favorite tunes.

And just because it seems like forever since I've let you inside my strange and wonderful world I should tell you that whenever I listen to this album I think of my birthday when I was in 6th grade or so. I played a LOT of Gremlins 2 on the original Nintendo. Y'know that wasn't a half bad game if I remember....

Useless Fact: This album was rereleased on a little label called "Restless" in 2003. There weren't any bonus tracks or anything - it was almost an exact copy of the original.
Posted by The Old Man at 10:47 PM