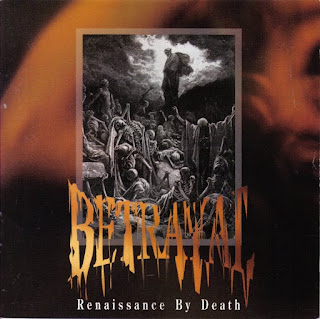 1. Renaissance By Death
2. The Invitation
3. Fallen Deceived
4. More Faith Than Me
5. Escaping The Altar
6. Assassins in the Midst
7. Mortal Flesh
8. Stroll Thru a Wicked Age
9. Prophets of Baal
10. Plead the Blood

I remember when Betrayal first came out. There was a lot of hype surrounding their debut. They even had a little phone number you could call and hear a message from the band and a short sample of the music. Speaking of which it is mostly technical thrash. Of course you've got your chunky riffs, your melancholy guitar interludes, and a bit of jazz thrown in for good measure. A lot of people didn't like Chris Ackerman's vocals and I can understand why. He has sort of a clean punk shout that sometimes seems at odds with the music - almost like it's not in time with the rhythm of the song (see "Escaping the Altar" for an example of this). I like it though mostly because there are some tasty riffs here. A lot of the lyrics have to do with the dangers of Satanism and the occult, take for example "Stroll Thru a Wicked Age" which is almost a history lesson set to music. It's a pretty good disc if you can find it.

Useless fact: Betrayal used to be called Martyr before they got signed.
Posted by The Old Man at 10:56 PM