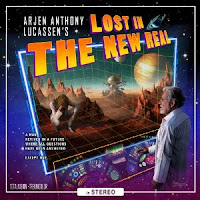 Lucassen, Arjen Anthony - Lost in the New Real
2012, Inside Out

Disc Two:
1. Our Imperfect Race
2. Welcome to the Machine (Pink Floyd cover)
3. So Is There No God?
4. Veteran of the Psychic Wars (Blue Oyster Cult cover)
5. The Social Recluse
6. Battle of Evermore (Led Zeppelin cover)
7. The Space Hotel
8. Some Other Time (Alan Parsons Project cover)
9. You Have Entered the Reality Zone
10. I'm the Slime (Frank Zappa cover)

I have to be honest - I wasn't that excited about Arjen doing a solo album. I don't really know why. He said in an interview that he spends a lot of time thinking about what the fans want. But on this album he just "didn't give a s**t" and was going to do what he wanted. No worries though, this isn't out of left field or anything. It's actually a pretty good album though it's not as heavy or as progressive as his other material. The concept involves "Mr. L" (who appeared in Ayreon's last album) having been cryogenically frozen and thawed out a hundred or so years in the future. Legendary actor Rutger Hauer narrates each song as Mr L.'s "counselor" helping him adjust to his new surroundings. The story is pretty interesting as it consists of snapshots of the future from the way the government regulates child-bearing ("Parental Procreation Permit") to the commercialization of euthanasia ("Dr. Slumber's Eternity Home"). The subject matter can actually prove to be quite thought provoking.

While at first glance it seems like the music is all over the place, encapsulating all the styles Arjen has played with other the years: rock, metal, folk, Celtic, psychedelic, progressive - you name it. Yet somehow, aside from the rather atmospheric opener and closer the album is a pretty solid (and surprisingly cohesive) space pop-rock album. Nothing here is quite progressive per se but that is okay. The songs are fun to listen to even if they seem to me to be lacking a bit. I like the first disc but I don't find myself wanting to listen to the second disc as much. "Our Imperfect Race" and "So Is There No God?" seem like castoffs and while I loved the cover of "Welcome to the Machine" I'm not really familiar with the other bands he covered. I'm not saying it's bad, I just like the first disc better but the second disc is more of a bonus so it's not that big of a deal. In fact I daresay this is one of the few albums that I appreciate more as a single disc.

One last thing if I woke up one hundred years in the future and Rutger Hauer's narration is what my "counseling" consisted of - it would not ease my transition one bit. He is creepy as heck. Though that's good for what the album is doing.

Useless Fact: Is it sad that I don't thing a "Parental Procreation Permit" is a totally horrible idea? Seriously, some people should not have kids.
Posted by The Old Man at 8:36 PM