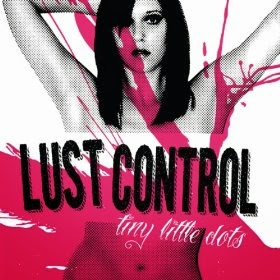 While I have always been a big fan of Lust Control, their previous output could probably best be described as "an awful racket." I never in a million years thought they would put out another album, but after a successful Kickstarter they're back with Tiny Little Dots. This album is a big change for them as it is actual music (remember, I'm a fan!). Specifically, the guys have injected a lot more punk attitude a la Crashdog. Gene's vocals are a lot more gruff and raw, not unlike Spike Nard's - especially in songs like "Make Money and Die" and "There Go I." The album is a lot heavier with thicker guitars and beautiful, clean, full production. This is amazing to me seeing as the Kickstarter was a mere three grand! Oh, and I should probably mention that this is, by leaps and bounds, the best material the band has ever recorded. Like... it's even good when stacked against other bands. "Sheepeater" has a cool groove and some gang vocals. "Make Money and Die" is a monster punk tune with a killer hook. Likewise, "Fire Ants" is another pure punk ditty with a great sing-along chorus. "Finger" and "G.D.P." are downright metal. This album is so good you might not believe it was the same band. I hope this is the start of something new with these guys and not just a one-off because I would love to hear more!

I think it might be cool to hear some of the old school songs with this kind of sound and production. "Madolyn Murry O'Hair" in particular would be awesome reworked in the new style.

Useless Fact: "G.D.P." stands for "Grandpa's Dangerous Prayer" and is a song about Gene's grandfather and his ministry. The concept behind the album title and cover art is that when one is looking at pornography you're not really seeing a person. You're seeing an illusion created by millions of tiny little dots.
Posted by The Old Man at 10:01 PM