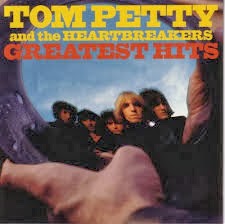 If you're an avid reader of my blog you might have seen me mention my most hated radio station ever: 95.5 in Savannah. It's famous for its musical "diversity." I mean it will play AC/DC songs from both the Bonn Scott and Brian Johnson eras! Anyway, occasionally they'll play a Tom Petty song. At some point I realized that these Tom Petty songs were probably the only songs I really enjoyed (other than Pink Floyd). I also realized that "Mary Jane's Last Dance" is probably one of my favorite songs ever. So.... I picked this up while I was getting groceries one day. It's good. Though I'm more familiar with songs from track eleven and on because the others are a bit before my time. However, these have grown on me too, especially "The Waiting" and "You Got Lucky." It only goes up to 1993 which means it's missing "You Don't Know How It Feels" - another song I never get tired of. I have now made it a priority to get some more Tom Petty because I have learned that singles collections leave out some of an artists best stuff.

Useless Fact: The video for "Runnin' Down a Dream" is a tribute of sorts to cartoon/comic strip/video game  Little Nemo in Dream Land. The video for "Into the Great Wide Open" starred Johnny Depp and Petty himself as the "roadie named Bart." "Mary Jane's Last Dance" starred Kim Basinger as a... corpse.
Posted by The Old Man at 7:31 PM