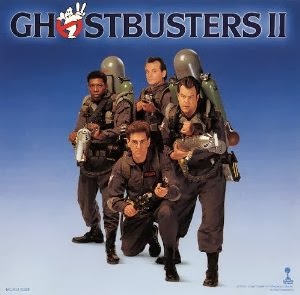 Back in the day I was a HUGE Ghostbusters fan. Eh... who am I kidding? I'm STILL a huge Ghostbusters fan. If Ghostbusting was an actual option for a profession I would be doing it instead of writing this. I love both movies. I'm one of those people who still don't understand why everyone thinks the second one was so terrible. My love for the franchise extended so far that I bought this soundtrack on tape as a lad. I listened to it repeatedly during the summer Ghostbusters II came out. It hasn't quite held up as well as I expected. The Bobby Brown songs are good early 90's R&B/Hip-Hop but the New Edition and James "J.T." Taylor songs are kind of boring. I don't even remember them being in the movie. I also don't care for the Oingo Boingo or Elton John tracks either. "Spirit" has an appropriately creepy vibe and is one of my favorite tracks as is RUN-D.M.C.'s "Ghostbusters" which features some lines and hooks from Ray Parker, Jr.'s original. It's nice when I need a quick nostalgia fix, but overall not as great as it was when I was young.

Useless Fact: Not a fact - a challenge: which scene does each song play in? If you're correct you get nothing but my admiration.
Posted by The Old Man at 11:40 AM