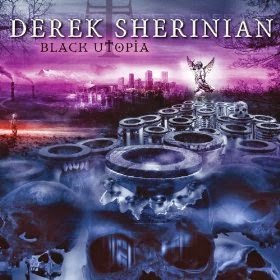 I bought Black Utopia while I was on vacation based on name alone. As most prog fans know, Derek Sherinian used to play in Dream Theater. This album also features guitar legends Yngwie Malmsteen and Zakk Wylde. I did not know it was an instrumental album when I bought it. I'm not much for instrumentals for some reason. Despite that I enjoy this album as the music is exactly as stellar as you think it would be considering the people involved. There's a LOT of shredding. However, it's not a frequent player for me and is usually relegated to background music.

Useless Fact: This is actually a reissue. I think the original came out in 2002 or something.
Posted by The Old Man at 9:24 AM