Vanden Plas - "Chronicles of the Immortals - Netherworld [path one]" 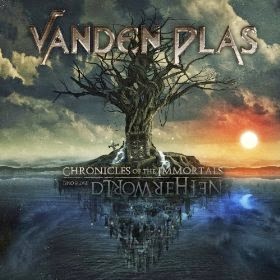 Vanden Plas - Chronicles of the Immortals - Netherworld [path one]
2014, Frontiers

While listening to Chronicles the first time I was thinking I was going to be done with Vanden Plas. I didn't like the last album. It seemed boring to me. It's clear to me that the band is far more interested in making "theatrical metal experiences" than they are albums with songs on them. However, I soldiered on. Eventually I started to warm up to the album and now I would say I really like it. The songs have some meat to them and it holds my attention a lot better than Clockwork. I think there's some really great melodies and choruses here especially in "New Vampyre" and "Soul Alliance." The addition of a female vocalist adds some welcome variation too. The whole putting-numbers-in-where-letters-should-go thing kind of annoys me though. Christ 0 is still my favorite but I'm not quite ready to give up on Vanden Plas yet. I'll see what [path two] or whatever they come up with next before I make a final judgement.

Useless Fact: The concept of this album is based on a long running series of fantasy novels by German author, Wolfgang Hohlbein. Man, that is one German name right there.
Posted by The Old Man at 9:40 AM