Iron Maiden - "Number of the Beast" 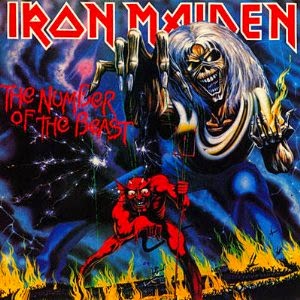 When I was growing up Number of the Beast was like numero uno on any Christian watchdog's hit-list. Just look at the cover art! There's Satan! The chorus of the title track says "666!" They're evil. Case closed. I mean looking at the lyrics and understanding the context would get in the way of sensationalism - and that crap sells! So yeah... contrary to popular Christian belief the song is far more "horror story" than "evil worship song." In fact, the narrator is expressing horror at what he's seeing, desperate to call the authorities. Also, let's take a look at that cover art again. Is the devil on strings like a puppet? Were Iron Maiden actually commenting on the true sovereignty of God? Um... probably not, but I think it's interesting nonetheless. It's got great anthemic songs - "The Prisoner" and "Run to the Hills." I don't have to tell anyone reading this that The Number of the Beast stands as a metal classic. An essential disc for any metalhead, Christian or no. Walmart chains regularly carry this album so you have no excuse not to buy it!

Useless Fact: While on the surface "22 Acacia Avenue" is about a hooker at said address. Of course, like a lot of Iron Maiden songs, a little digging reveals that it's actually against such things. It pleads for the lady to wake up, value herself, and get out of the situation.
Posted by The Old Man at 9:15 AM