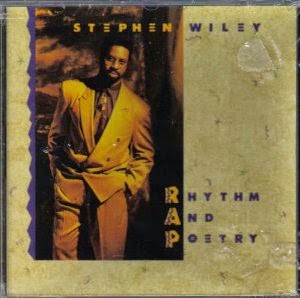 I remember Stephen Wiley because back in the day my mother bought this tape. Not for me, mind you. She didn't think it was rap. I think she thought it was going to be like Larnelle Harris or something. Yes, yes, I see the letters of the album spell "R A P" too. I don't know why she didn't see it. Anyway, I liked it okay but was never too enamored with it for whatever reason. He's got an old school rap style with early 90's hip-hop music. I actually enjoyed it more now than I did then. Go figure. Extra points for using the Inspector Gadget theme in "On the Devil's Case." Also, "Teenage Mutant Youth Group Member" features a cornucopia of pop-culture stuff - the Ninja Turtles, Pee-Wee Herman, etc. Of course here's the *sigh* rap ballad, "You're My All." Folks, there's the thing, at some point you're just talking. That's what "You're My All" is. He's just talking over slow music. ARGH! I. HATE. RAP. BALLADS. Other than that though, it's a fun little CD, and a fun little trip down memory lane. Like I said, I enjoyed it a lot more now than I did then.

Useless Fact: From what I've read Stephen Wiley was one of the first Christian rappers ever with his song "Bible Break." Also, Rex Carroll of Whitecross fame plays guitar on the rock/rap mashup "Love God Hate Sin."
Posted by The Old Man at 11:17 AM